Held in conjunction with the Glasgow Highland Games, Chief of the Clan Davidson, Grant Guthrie Davidson, was Chief of the Games and with his wife Brenda was Guest of Honour at the event.

Dave Chagnon, the Sennachie of the Clan Davidson Society of North America was the driving force behind this major event, in which over 250 enthusiastic Clansmen and Clanswomen took part. 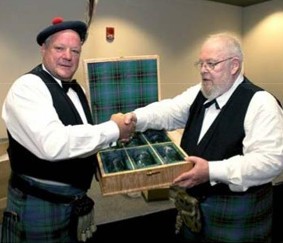